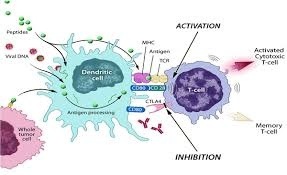 I have been getting Dendritic Cell vaccines from Dr. Nesselhut in Duderstadt for two months now. It is my view that he is the world’s foremost authority on immunotherapy. But…..

The dendritic cells have been mostly primed with NDV antigens as part of the Newcastle Disease Virus Treatments. I also had a Dendritic vaccine primed with P2X7. The problem is that all research that I came across suggests that dendritic cells primed with the actual tumour tissue is the most effective.

I discussed this with both Dr. Nesselhut Senior and Junior, and they can prime dendritic cells with tumour tissue as it turns out. The problem is that they need lots of tissue (1cm cube). Such a quantity can only be obtained during surgery, or by laparoscopic biopsy. Surgery is not an option for me, and laparoscopic biopsy I feel is just too risky in terms of peritoneal spread. Nesselhut did not recommend this either.

A needle biopsy is not an option I was told, as it does not yield enough tissue to work. Using circulating cancer cells in the blood stream is another possibility, however Nesselhut does not offer this and is sceptical about its efficacy anyway.

Hallwang also offer a Dendritic Cell Vaccine. They use either the circulating tumour cells or tumour tissue from a needle biopsy to prime their vaccine. Hallwang claim to have access to a large modern lab (Which I assume is RGCC) and this may give them an edge where it comes to priming the dendritic cells. I just don’t know. The main drawback with Hallwang is the significantly higher cost of the treatment. I guess I won’t know how well it works unless I give it a try, and its something I feel that I have to try.

To collect the tumour cells I had a liver biopsy. I was told that this is more effective than using the circulating stem cells, which would involve just a simple blood draw. This is the reason why I had to pass on the direct to liver mitomycin injections, as it was a choice of one or the other.

I had a liver biopsy in Australia before, so I thought that I knew what I was in for, but the germans always manage to surprise. The first hint that something was going to be different was when they told me that they would put me to sleep for the procedure. The biopsy in Australia was done under a local anaesthetic only. I was perplexed, but quite welcomed this, as I remember the biopsy being very painful despite the anaesthetic.

The Australian biopsy used a type of a spring loaded needle gun. Once it was inserted into the liver, it would fire and collect a thin sample core. It was painful but after the procedure there was just a small pin sized hole. No drama. It was quite surprising then to find quite a large hole in comparison this time round. What sort of sized needle did they use? No wonder they did not want me to be conscious for the procedure.

I later found out that they use a thin flexible tube/needle, that can be navigated through the liver. To use it however, they need to make an incision at the entry point. It healed well and was not a problem really. It was just unexpected and I will be left with a small scar.

The sample along with some of my blood to culture the dendritic cells from, were shipped to the lab and the vaccine should be ready for me next month. Looking forward to this. It will be most interesting.

I have been diagnosed with stage 4, metastatic colorectal cancer in October 2012, 3 days after my 44th birthday. There is no cure, but I am determined to go down the road less travelled to find one. I have setup this blog to document my journey and hopefully help others in the process. My view is that if there is a cure, it does not lie with traditional chemo, but with the immune system. Time will tell.
View all posts by Ren →
This entry was posted in Dendritic Cell Vaccine, My Journey, Treatments. Bookmark the permalink.