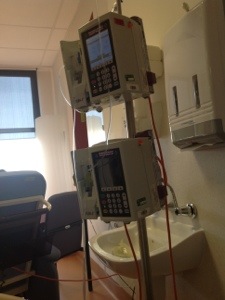 This cycle of FOLFIRI was the worst and best at the same time. During the first week, the level of nausea hit an all time high, and It took a great deal of control to fight the urge to vomit. This lasted for several days and the whole first week was a write-off. Even my vitamin C IV, which always reduced or eliminated my nausea (for a while at least) seemed less effective.

During the second week, things improved, and towards the end of the cycle, I had several days of being almost normal. This was a refreshing change from the near constant nausea of the past 7 months. I also felt that the type of nausea during the second week had more to do with the chemo rather than my ongoing liver problems, which have been the major contributing factor in the past.

I finally had a chance to see a dentist for my tooth infection that has been plaguing me for the last 6 weeks or so and I was given a broad spectrum antibiotic. This worked like a charm and the infection cleared up within 3 days. Should have done this earlier.

This cycle brought additional problems. A rather painful ulcer developed on the side of my tongue. Fortunately it cleared up within a week. As if I did not have enough problems, haemorrhoids popped up, and these don’t seem to be going away. All courtesy of Leucovorin I suspect. Seems like pain is becoming a part of my life as much as nausea. (I prefer the pain however).

During this cycle I got another blow. CT scans showed no significant tumor shrinkage. In fact most of my liver mets grew by a few millimetres. This means that just like FOLFOX, the second line FOLFIRI is not having much impact. I am committed to two more cycles, but after that I will pursue other treatment options while I am still in relatively good health.

I have been diagnosed with stage 4, metastatic colorectal cancer in October 2012, 3 days after my 44th birthday. There is no cure, but I am determined to go down the road less travelled to find one. I have setup this blog to document my journey and hopefully help others in the process. My view is that if there is a cure, it does not lie with traditional chemo, but with the immune system. Time will tell.
View all posts by Ren →
This entry was posted in My Journey. Bookmark the permalink.