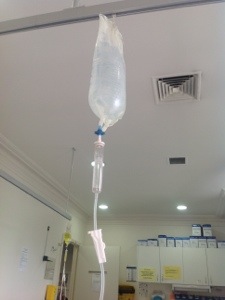 I had my 6th high dose vitamin C IV today. The dose was gradually increased over the last two weeks and I have finally reached my maximum dose of 90g. This translates to roughly 1.5g per kilogram of body weight.

The science says that at this dose, Vitamin C should start to behave as an oxidant, which is the reverse of its usual role. Vitamin C should start reacting with metal ions to produce hydrogen peroxide, a powerful oxidant. If the theory is correct, this should start doing damage to the cancer cell DNA, and when this gets severe enough, trigger cell death through apoptosis.

Vitamin C is structurally very similar to Glucose and cancer thrives on glucose. Cancer cells soak up vitamin C like a sponge, probably thinking that it is glucose. Unlike glucose however, Vitamin C can not be used for energy and I hope that this also helps to starve my little mutants. 🙂 Normal tissue does not have the same affinity for Vitamin C and there the concentrations should not build up.

The IV now comes in a one litre bag. That’s a lot fluid to infuse and takes 2-3 hours. The vitamin C is given in its sodium ascorbate form. I imagine that giving pure Vitamin C would acidify the blood too much and probably kill you. (So for any ‘do it yourself’ buffs, remember to use sodium ascorbate, not ascorbic acid)

I have not experienced any negative side effects following even the 90g infusion. I am noticing one positive side effect however. On days when I have my IV, I have very little or no nausea. Nausea is something that I have been struggling with, even before chemo, due to my extensive liver damage.

I don’t believe that high dose Vitamin C is a cure for cancer, as some claim, however I do believe that it is another piece of the puzzle. I also believe that its use is limited, as eventually cancer cells will mutate and learn to express additional DNA repair mechanisms. After this, it is likely that High dose Vitamin C will become ineffective as an oxidative chemo agent, though it may still play a role in supporting the immune system. This may also cause other treatment methods like oxaliplatin, cisplatin, or even radiotherapy to become less effective, as these also induce DNA damage.

My oncologist still rolls his eyes, whenever I mention my Vitamin C IV, but I figure “what does he know anyway?” He does not know how to cure me and does not believe that there is a cure. It would thus be insane to just follow his advice. Right?

I have been diagnosed with stage 4, metastatic colorectal cancer in October 2012, 3 days after my 44th birthday. There is no cure, but I am determined to go down the road less travelled to find one. I have setup this blog to document my journey and hopefully help others in the process. My view is that if there is a cure, it does not lie with traditional chemo, but with the immune system. Time will tell.
View all posts by Ren →
This entry was posted in My Journey. Bookmark the permalink.